NDC International has represented HANMI’s full equipment line for decades! For over 40 Years HANMI Semiconductor has focused on building partnerships and investing in a sustainable future, earning them a leading position in the semiconductor equipment industry for their design, development and manufacturing.

In June HANMI announced completion of their fourth micro SAW plant, making them the world-leader in production. They are now able to produce 1,320 dual-chuck saws each year in their South Korean plants.

Previously the semiconductor packaging saw sector was dominated by Japanese firms who owned 80% of the market share. HANMI expects that South Korean chip producers will experience significant cost savings when they choose their micro SAW and avoid the cost of importing from Japan. For our US customers, it provides an alternative to the current package sawing machines like Disco, ADT, BESI, Towa, etc.

Not only does the new HANMI micro Saw relieve supply and demand uncertainty, but it also delivers superior reliability, convenience and productivity when compared to the competition.

In a display of confidence, HANMI is offering a free warranty period of 18 months which is longer than the competition.

Introducing the micro SAW 2210A

The new micro SAW 2210A was designed to replace the integrated 3rd party saw in HANMI’s Vision Placement System.  It is backed by HANMI’s one-stop service (for both the saw and the vision placement system) and long-standing reputation.  Core advantages of the micro-SAW 2210A include maximized productivity, super-precision accuracy and proven reliability.

In addition, the micro SAW 2210A gives customers the ultimate in convenience including features like auto dressing, smart cutting sequences and 8 channels.  The system has auto search and write, drag and drop and clip board capabilities as well as individual velocity control and cutting simulator. 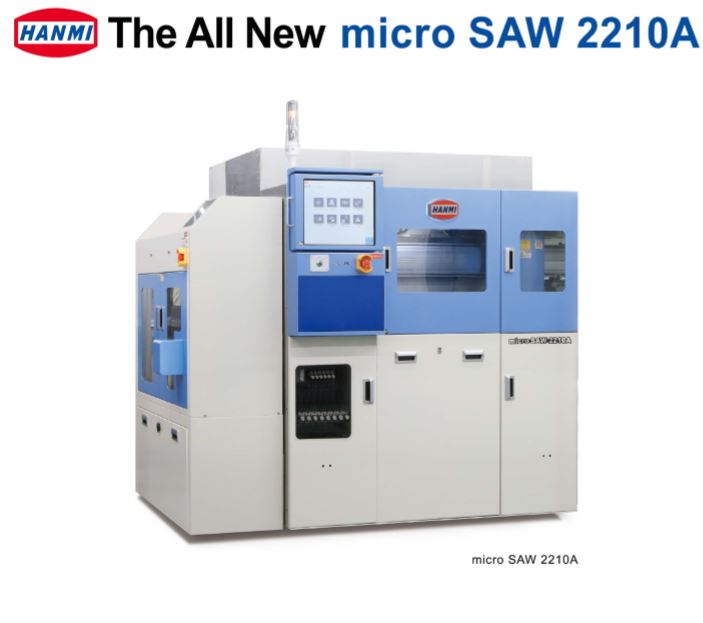